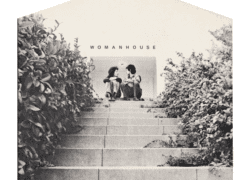 Dream House: a collaborative zine in honor of the 50th anniversary of Womanhouse
Deadline: December 1, 2021

In the fall of 1971, twenty-five students in The Feminist Art Program directed by Judy Chicago and Miriam Shapiro, began to develop Womanhouse, a project conceived by art historian Paula Harper. The collaborative site-specific project was housed in an abandoned mansion on Mariposa Street in Hollywood. The students generated content through consciousness-raising sessions focused on their experiences as young women living in a patriarchal society. In late January 1972, Womanhouse opened her doors as the first site-specific collaborative work made by and about women.

Dream House marks and honors the 50th anniversary of this groundbreaking work of feminist art. The zine title is a nod to the surrealist aesthetics that filled Womanhouse like Sandy Orgel’s Linen Closet where a woman was violently severed by her home’s architecture, or Vicki Hodgetts’s Eggs to Breasts where kitchen walls sprouted fried eggs and disembodied breasts. This dream was a nightmare as a commodified bride was trapped within her overflowing dress, and a giant-sized rocking horse showed patriarchy’s infantilization of women. The living room became the stage for nightly performances that revealed women’s personal struggles and the never-ceasing repetition of domestic labor. Like the physical structure of Womanhouse which was subsequently demolished, the dream house is a ghost, a mirage, or a utopian fantasy always in need of reconstruction. Through a collective dreaming and use of materials old and new, let’s build the woman-house of today.

Submissions may be in direct response to Womanhouse or may be in consideration of gender and labor, conditions of the female body, cultivation of domestic spaces, the legacy of consciousness raising, collective gesture as form, and other subjects important to the history of feminist art. All participants will receive a copy of the publication.

Text Submissions:
Up to 800 words in Word Documents

Email submissions and questions to cindyrehm@gmail.com