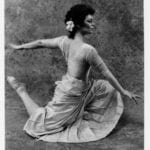 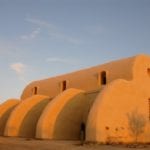 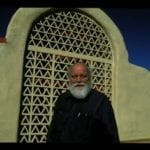 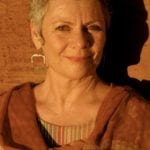 Years of friendship and a deep mutual love of music and humanity has been the impetus for a magnificent house and an artist residency program in Joshua Tree.

Lou Harrison, a major American composer of the twentieth century was also a talented musician, instrument builder, humanitarian and visionary. He had a long history of collaborations with dancers such as Jean Erdman, Merce Cunningham, and Jose Limón. “Lou [Harrison], in his life and in his music, was the first one in a very beautiful way to bring world music to western music sound,” said Eva Soltes, founder of the Harrison House Music & Arts residency program. “[Harrison] mastered Korean music, Chinese music and Indonesian music.”

Soltes met Harrison in the mid 70’s when she was a dance student at the American Society for the Eastern Arts program in Berkley. Harrison and his partner Bill Colvig were there making Gamelan Instruments. Gamelan refers to a collection of instruments made in Indonesia, such as metallophones, xylophones, kendang (drums), gongs, and bamboo flutes, to name a few. In the Indonesian tradition these instruments are made for a particular village and musicians travel to that village to perform with those instruments. A very different process than that of European performances.

Soltes has had a long and distinguished career as a dancer, music producer, and filmmaker and has recognized and appreciated visionary musicians from all parts of the world throughout her career. Her friendship with Harrison had a profound influence and was the primary inspiration for the Harrison House Music & Arts residency program.

Soltes was with Harrison as he explored Arizona and Utah looking for a place to build in the desert. Finally a young composer friend, George Zelenz, introduced him to Joshua Tree. He bought an acre of land and began building a straw bale house. As a skilled instrument builder, also interested in the relationship of architecture to acoustics, Harrison designed the house with that in mind. The ‘great room’, with its exotic eastern influence and cathedral-like scale was built with specific musical proportions. As Harrison designed and built the house with help from friends, Soltes filmed the process. On the afternoon it was completed, she waited for him to arrive with her camera poised to capture his reaction. While waiting she discovered the floor was wonderful for Indian dance and told Harrison. He responded, “This place is for you, too dear.” The house was completed almost a year before Lou Harrison died.

The residency program was initiated after Harrison’s death, when composer Terry Riley asked if he could hold a concert in his honor. Luana Lynch, a Joshua Tree resident told Soltes she could bring an audience. “It was classical North Indian music and I thought people would leave at the intermission, but nobody left,” Soltes said. “I knew this was a special place, a special community, and a special house that he built. It’s proving to be that. Artists come here and very often do their best work.”

Through a series of synchronistic events Soltes bought the Harrison house, moved into a house nearby and started the residency program. There is currently no application process, although Soltes is considering starting one. “I invite artists whom I have known over the years, some who were closely associated with Lou and others whom I meet in my travels,” said Soltes. Residencies can last anywhere from a few days to a few months and Soltes believes in making each residency a deeply productive experience. Every artist is fully supported with transportation, food, and amenities, allowing them to focus solely on their work.

When Ted Quinn (Founding member of Radio Free Joshua Tree and the Listening Lounge) wanted to perform at the Harrison House, Soltes asked him, “Have you ever done a concert of your own original songs?” This challenged him and gave him the impetus and occasion to gather and publish “Things Worth Keeping: Ted Quinn” a songbook of his own work.

“It was an honor to play in this place where I’ve seen many great artists, ranging from Fred Frith of Henry Cow to a 30 piece Gamelan orchestra,” said Ted Quinn. “Eva’s passion, as a dancer, presenter and film producer makes her a true renaissance woman and a precious gift from Lou Harrison to our artistic community.”

The SHS Foundation has been funding the residency program for the last four years. In addition, Soltes is grateful for the generosity of private donors. For instance, the composer John Luther Adams was there for two weeks under the sponsorship of Sue Bienkowski, and the John S. Knudsen Trust will be sponsoring the upcoming residency of Danny Paul Grody and Kenric Taylor, two young musician/composers from the Bay Area.

In 2013, Music & Arts hosted a night of Balinese music and dance performed by the Cal Arts Gamalan Burat Wangi. Directors Nanik and Nyoman Wenten are long time friends of both Harrison and Soltes and were part of the program where Soltes studied dance. “For ten years we had talked of staging a Gamelan performance under the full moon,” said Soltes. “Last May we made it happen.” An outdoor stage was constructed specially for the performance, and has added an entirely new component to the venue for future outdoor events. “It was a very special evening that we dedicated to Lou, his mentor Pak Cokro (father of one of the gamelan directors) and Sam Scripps who sponsored the American Society for Eastern Arts Program where we all met in the early 1970’s.” That event precipitated the buying of a new house for Soltes, allowing for more parking by offering walking access from the street behind the Harrison House. It also provides Soltes with a new home and studio to pursue her own work.

“Lou Harrison: A World of Music” the feature documentary by Eva Soltes had its world premiere in 2012 and has been screened at festivals and venues around North America over the past two years. The completion of this phase of her work now allows Soltes time to edit three other films, as well as dance and music projects of her own. “Artistic performances have always been a part of my life,” Soltes said. “I realized a big dream a few years back when I invited an ensemble of musicians trained in the same classical Indian tradition that I practice, to accompany me in an Indian dance performance. For the moment, however, I’m happy to be programming the work of others.”

Soltes will be one of the performers in the upcoming “Desert Stories” series on February 1st at the Black-Box Theater in Joshua Tree.

“[Harrison House Music & Arts] is a labor of love,” Soltes said, “I am fortunate that my profession and passion are one. I often feel that artists and the value of art to our spiritual wellbeing and growth are under-appreciated and underestimated. I believe it’s important for everyone to do what they can to make the world a better place. I found something that I can do alongside developing my own creative projects that inspires and supports new art and living artists.”

For information on programs go to: www.harrisondocumentary.com